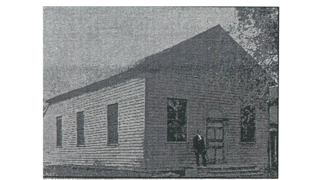 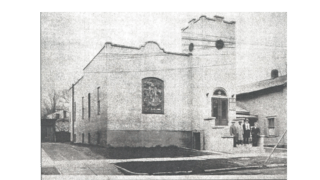 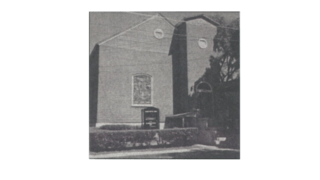 In 1857, an offshoot from the Methodist church was organized and became known as the Wesleyan Methodist Church (colored). That church was located on North Albany Street. In 1903, after several conferences and negotiations, the church took on the name Calvary Baptist Church and was under the leadership of a Rev. Lomax. From 1907 to 1910, Rev. K. N. Clark was Calvary’s pastor. The pulpit was vacant from 1910 to 1915, at which time Rev. William D. White became pastor.

In 1917, another church structure was erected under the direction of Rev. W. H. White, whose pastorate lasted until 1926. Following Rev. White, Rev. B. H. Payne began tenure as pastor which was to last nearly forty years. The building underwent a number of structural and cosmetic improvements during Rev. Payne’s tenure.

Rev. Payne retired as pastor in 1965, at which time the Rev. Louis Cunningham was called by the church. Under his administration, extensive renovations were again done on the building to produce the structure we worship in today. Many names were added to Calvary’s membership role during Rev. Cunningham’s tenure and students from local colleges started participating in the church services.

Rev. Cunningham pastored at Calvary until 1974. After that, Rev. James C. Priest was installed to shepherd the congregation. He served until 1976.

For the next eleven years (1976-1987), the Rev. R. D. McClain was pastor. In addition to fulfilling his duties at Calvary, Rev. McClain was also involved at the Cornell United Religious Works office at Cornell University. During his tenure, the college student population of the church again grew and they began to play a more significant role in the spiritual growth of the church. A number of the students have taken their ministries from Calvary and gone on to carry the gospel to other cities and countries.

In 1987, Rev. McClain resigned as pastor and, following a pastoral search, was replaced by Rev. Gregory F. David. Under his pastorate the church continued to grow. His ministry placed heavy emphasis on teaching and as a result, there was more substantive study of the Word of God. He structured the mid-week Bible Study to maximize learning and challenged those in attendance to “study to show thyself approved.” Rev. David also endeavored to promote higher levels of stewardship through the teaching of the Biblical principle of tithing. In addition, he brought strong administrative skills which he utilized to affect a certain amount of administrative reorganization prior to his departure in June, 1991.

Again, a pastoral search process was initiated. Recognizing the need for continuity and stability, the church appointed an Interim Pastor to provide ongoing pastoral services. The Rev. Derrick Span served in that capacity for over eight months. Rev. Span brought to Calvary a vision for ministry that sought to more fully actualize the essential teachings of Jesus Christ. He challenged the congregation in its understanding of the mandates to which followers of Christ are called, especially in the area of a socially-conscious gospel which seeks to minister to the whole person by addressing any concerns that negatively impact the human condition, among them racism, poverty, hunger, and injustice. Rev. Span’s ministry also emphasized and encouraged further study of our African history and the need for a fuller appreciation of who we are as people, both from an historical as well as a contemporary context. He is credited with the inclusion of the African History segment of our morning service as well as the singing of the Black National Anthem. Rev. Span served as Interim Pastor until March of 1992.

Rev. William W. Johnson was elected and preached his first sermon as pastor in August of 1992. Under his leadership, the church grew financially as well as the membership. He strongly encouraged fellowship and as a result, orchestrated the Senior Citizens’ Dances that were held in the basement of the church. He left his position as pastor in December of 1994.

The vacancy in the pulpit was filled by Rev. Daris Dixon-Clark in December of 1994, first as Interim Pastor, and finally as pastor in May of 1996. His position as President of Black American Baptist Churches gave Calvary exposure on a national level. During his time as pastor, he ordained three deacons and licensed five ministers. The church was also able to acquire the property across the street in hopes of making it a parking lot for Calvary. Rev. Daris Dixon-Clark resigned as pastor in December of 2003.

Following the resignation of Rev. Clark, Rev. Clarence Welch served briefly as Interim Pastor. He served from the beginning of January 2004 until his untimely death later in that same month.

Upon the death of Rev. Welch, Rev. Nathaniel Wright accepted the position as Interim Pastor beginning in February of 2004 and assumed the position as full-time pastor December 2005. Under the leadership of Rev. Wright, the church membership has grown, especially among college-students and younger members. Rev. Wright has placed a strong emphasis on training within the church body and put in place a Christian Education Ministry for this purpose. If you live in the Ithaca area or are just in Tompkins County for a visit, Calvary Baptist Church would love to have you worship with us. We believe that God inhabits the praises of His people, so, come and experience God through inspired music and be equipped by a message from God’s uncompromising and liberating word.

Join Us In Worship